I’m delighted to cover the first ever solo exhibition of Pablo Picasso at Tate Modern and what is certainly the blockbuster art show of the season here in London. I believe that Picasso was one of the most relevant figures in the arts in the 20th century, and a great artist who kept exploring new artistic avenues all his life.

I liked the curating work done for this EY exhibition at Tate Modern, as I did like the one done at The National Portrait Gallery at the end of 2016 based on “Picasso Portraits“. I found the latter was excellent to showcase the artist’s capacity to redefine the portrait with each woman in his life.

Picasso said once that “The work one does is a way of keeping a diary.” The current art exhibition at Tate Modern is like a diary that takes visitors on a month-by-month journey through 1932; a year that’s been called his ‘year of wonders’ for how relevant it was from a personal and career perspective.

In his personal life, he was 50 years old and his marriage with Olga Picasso (previously Khokhlova) was under strain. The affair he was having with the significantly younger Marie-Thérèse Walter, a young woman of 22, offered him a escape and a source of inspiration for much of his work in this period. Walter is the central presence in this exhibition and who inspired him to reach a new level of sensuality with his paintings.

From a career perspective, this was the year that cemented Picasso as a celebrity within the art world. A group of Paris dealers competed to launch the first ever retrospective of his work, when retrospectives of living artists were still unusual. Matisse’s retrospective at the Galeries Georges Petit in 1931 had been a rare exception and Picasso wanted to have his own too. He even declined offers from the MOMA in New York and the Venice Biennale to have his own retrospective at the Galeries Georges Petit, which happened in June 1932. Picasso took full control of the show to avoid giving too much power to his dealers. But, then he didn’t attend the opening, choosing to go to the cinema instead. That art show cemented his celebrity status and offered the first hint of having a new woman in his life.

He escaped to Boisgeloup with Marie-Thérèse Walter in July and August, and his style became faster and more fluid. She was a great swimmer, so he used this fact to showcase similarities between women and sea creatures with a strong surrealist influence.

This art exhibition presents also some of the drawings he did in charcoal in 1932. Some of them in canvas as they were works in their own right, not preparatory studies. For some paintings, he liked focusing on line and shape rather than in colour. I was lucky to see the fantastic “Picasso Black and White” exhibition held at the Guggenheim in New York in 2012, which explored the fantastic use of black and white he did throughout his career. It’d be good to see a similar art show like that in London sometime soon.

Towards the end of the show, we could see the series of drawings and paintings inspired by classical themes, both secular and religious, such as the Crucifixion, by Matthias Grunewald’s Isenheim Altarpiece and  scenes of reclining nudes and flute players, mostly associated with surrealism. Although he was sceptical of group membership of any kind. The flute players in purple and green reminded me of Chagall’s figures with a whimsical and magic touch.

The year that started with sensuous exuberance progressed into a more darkened mood after Marie-Thérèse fell very ill after swimming in the river Marne. His paintings reflected scenes of rescue and struggle. What’s more, he became increasingly anxious about the political situation there was in Europe at the time with populist nationalism and totalitarian regimes, which would eventually finish with tragedy first in Spain and then all over Europe.

Some of Picasso’s most iconic and loved works like ‘Nude woman in a red armchair’ from the Tate collection, ’Girl before a mirror’ from The Museum of Modern Art in NY or ‘The dream’ are displayed in this show . Also, I enjoyed to see two of the sculptures shown in this show created in Boisgeloup, a big bust of Marie-Thérèse and the ‘Cock’ that was a rare example among all the female figures he made; it shares the sweeping curves with them and includes a profile beneath the tail feathers. The original plaster was cast in bronze in 1952. One of The art berries’ pictures captures the ‘Cock’ and adds another profile to it.

I enjoyed this exhibition because at a time in which critics were questioning his ability to create new work, he once again redefined the tradition of western art with a new style full of sensuality, fluidity and vibrancy. Something only a great artist can do.

Fashion notes:
Raspberry wears a dress from COS stores.
Blueberry wears a shirt from Cynthia Rowley and a vintage jumper.
Follow my blog with Bloglovin 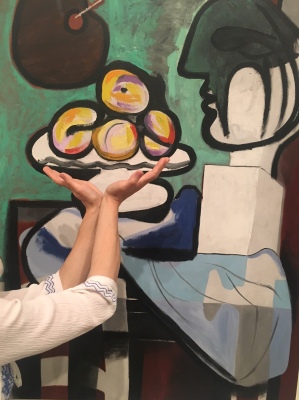 Curator and editor of The art berries. I enjoy blending with the latest art exhibitions in London and abroad, and writing about them on my blog. View all posts by The art blueberry

#lynetteyiadomboakye is still on @tate_britain in London until 31st May. #artshow #artelondres #oilpaintings #photoofart #photoftheday #creativityinart #theartberries #thecreativesnetwork #interactingwithart
Lynette Yiadom-Boakye is on @tatebritainlondon until 31st May. Photo by #theartberries #artinlondon #artshow #creativityinart #exposicionlondres #thecreativesnetwork #interactingwithart
This is the last art show The art berries went to last year before the UK went in lockdown. Lynette Yiadom-Boakye’s art exhibition @tatebritainlondon is still on until the 31st May. Do not miss it! #lynetteyiadomboakye #tate #artexhibition #exposicionarte #londonart #paintings #oilpainting #photography #theartberries #clothesmatchingart
The art blueberry next to an artwork made by Grayson Perry and displayed at a past exhibition there was @victoriamirogallery called “The MOST specialest relationship”,a nod to the term used to describe the relationship between the UK and the US. #britishartist #graysonperry #victoriamirogallery #theartberries #facebookceo #londonart #pastexhibitions
This is an art exhibition I saw @victoriamirogallery and it’s still available to view on Vortic Collect. The artist is Maria Berrio, a Colombian artist based in Brooklyn, NYC. #londonart #mariaberrio #colombianartist #latinamericanartist #theartberries #artperformances #artinteractions #treeoflife #treeartwork #vorticcollect
The art blueberry with her daughter (4 years old) at the Mother Art Prize 2020. A #groupartshow @cromwellplace organised by #procreateproject. The only #internationalart prize for artists who are also mothers. First time we include our daughters on the photos, but isn’t it the best show for that? #motheranddaughter #motherdaughterart #motherartprize2020
The art blackberry with her daughter (4 years old) at the Group Show for the Mother Art Prize 2020 organised and curated by Procreate Project and presented at Cromwell Place, a new art gallery in London. This is apparently the only international prize for artists who have caring responsibilities. We really liked it. Here next to Cassie Arnold’s work “MomBra #1”. Shame that is not on now....it lasted only 20 days, but we’ll watch this art space and the platform as well. Did you see it? If so, did you like it?
The Warhol’s exhibition was extended until the 15th November @tate
Our Guest berry from Australia interacting with an #artwork by Olafur Eliasson at Tate Modern. What a great art show! #artshow #artexhibition #sculpture #artphotography #londonart #contemporaryart #theartberries #guestberry #olafureliasson #tate
A photo from the #pastartexhibition of @olafur_eliasson @tate with The art blueberry on it. I was pleasantly impressed by this exhibition, which was the Autumn most popular art show in London last year. It’s so interesting to see how audiences interacted with these works and the effect the artworks caused on them. Well done Olafur!! Photo taken by my Australian friend living in Melbourne and visiting London. So happy to see her and to have her as a Guest berry. #olafureliasson #tate #contemporaryart #artinstallation #theartberries
A work from the past art exhibition of #olafureliasson @tate modern a couple of months ago. The art blackberry interacting with the artwork - a kaleidoscope #pastartexhibition #contemporaryart #londonart #theartberries #tatemodern #spiritualart #kaleidoscope
Tha art blackberry next to a Cy Twombly #sculpture @gagosian An art exhibition that has finished recently and we really enjoyed. Cy Twombly is always great 👍 #cytwombly #gagosian #pinkartwork #artlondon2019 #artelondres #theartberries
Loading Comments...
%d bloggers like this: